For all the wisdom of a lifetime, No one can ever tell, but whatever road you chose, I’m behind you, win or lose~ Rod Stewart

For day 23 of the June 1-30 challenge, found here, (which I’m assuming I’ll be completing in July lol), we’re to talk about a difficult decision we had to make. To chose whether you were in or out of a relationship or a job.

Most of you probably already know about my love affair with Abraham Maslow.

Over the course of my life, I’ve had to make several difficult decisions. Leaving my ex-husband with two little children was difficult, but in the end I knew it was the right one. When I left my VERY good job to go back to school, that was a tough one. Perhaps, one of the toughest decisions I’ve made was changing my career course. When I had my 11 year old, he broke my pelvis. I had another son 11 years prior, with whom I had preeclampsia, more commonly referred to as toxemia. I almost bled out after delivering him and, in the process of them trying to save my life, they created scar tissue. When I had my daughter two years later, it was not an issue. However, when I had my 11 year old, the scar tissue had grown to the point where it had fused my pelvis together. When they used forceps to pull him out, not knowing why he wouldn’t come, it broke my pelvis in the back from top to bottom. Four months later, when finally diagnosed, there was still a good inch to inch and a half between the bones to heal. 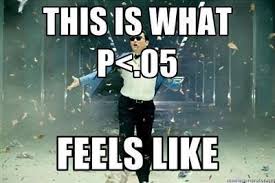 It’s funny, trust me 😉 P is the standard deviation. The smaller it is, the better your experiment results have to line up with your hypothesis.

When my youngest was 1, I had a pelvic surgery to scrape the scar tissue from the pubic bone. This is the bone in front of the pelvis and the one that stabilizes the pelvis as well as your spine. Before I went into surgery, my kindly doctor assured me it would be an easy surgery. I would be up and around in a week. Then, I woke up, and my life changed forever. There was so much scar tissue they had to remove the pubic bone and I was going to be in a wheelchair for six months and I was going to need back surgery (which I didn’t get for another 7 years). After having a long, long talk with my doctor, I realized the Pediatric Emergency Medicine program I was hoping to start was a pipe dream. I would never be able to move patients and I wouldn’t be able to complete rotations. It was devastating.

I didn’t know what to do with my life, so I sat down and thought about all the subjects that interested me. My undergraduate was Health Science and Sociology (approved for Pre-Med students) and I knew how much I loved Sociology. Sadly, there are extremely limited job opportunities for sociologists and moving all over the country with three small children wasn’t an option. Then I remembered the psychology classes I had taken. I remembered how much the human mind fascinates me. I know that I was lucky enough to have an amazing relationship with my children and I might be able to help other people have that. I know that I am lucky enough to have a wonderful husband and a great sex life and I might be able to help other people have that too. I don’t know if I can say I was thankful for that break, but I know I love psychology with a passion almost equal to Peds ER. I know I can make a difference, even if just for one person.

Did you enjoy? Let me know it! Cancel reply

The best of my best!

All those folks can't be wrong!

Looking for a fun subject?

A to Z Blogging Challenge

I write like
Kurt Vonnegut
About Kurt Vonnegut | Analyze your text
Professor $pliff
💞 with love, dot i/0. 💞

Journey Into A
Mike A. Connery

Reporting Live From The Strain

Rebelling against a culture that values assimilation over individuality.

The Most Revolutionary Act

Uncensored updates on world events, economics, the environment and medicine

Free speech for those who don't threaten free speech

Memoirs of a Wounded Healer